A Legacy of Rest for Shelter Pets

How love for one rescued dog in Westmoreland spread to hundreds of others all over the country.

The air was heavy with the unmistakable odor of dozens of dogs inside the Stevens-Swan Humane Society's shelter in Utica - pooches and purebreds, miniatures and mastiffs. As if on cue, the animals pressed their furry bodies against the doors of their cages, clamoring to be noticed by the visitors, their incessant yelps and yips pleading, "Pick me! Pick me!"

That day in 2015, Matt and Julie Ambrose chose a rambunctious 70-pound mixed breed hound named Rusty as the first recipient of a comfortable, sturdy bed they would donate to the shelter. "As soon as Rusty was lifted off the cold and damp concrete floor and placed on the clean and dry bed, he let out a deep, audible sigh, curled up, and right away went to sleep. That image will always remain with us," Julie recalls.

For Matt, who also happens to be Utica's deputy fire chief, the visit was emotional. "I got all choked up when I saw the animals, and would have loved to adopt them all. But it makes us feel better that we can at least provide them with warm beds." 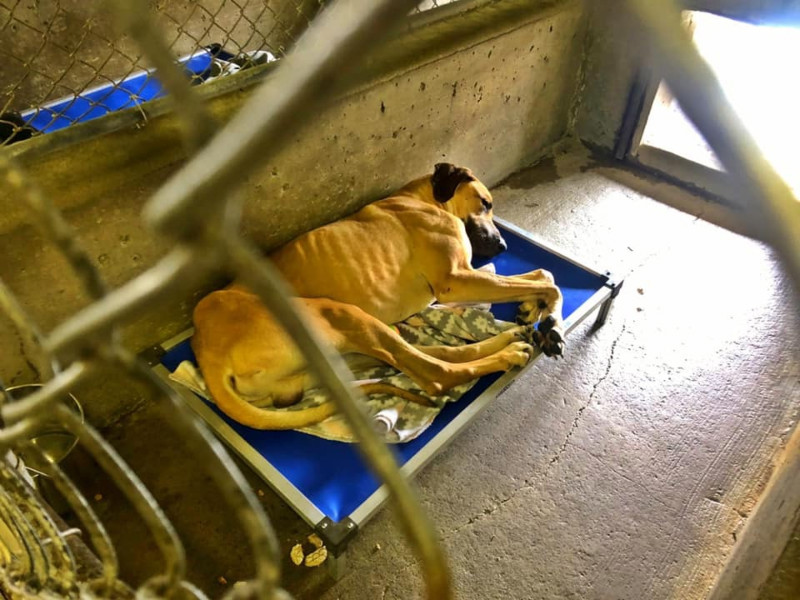 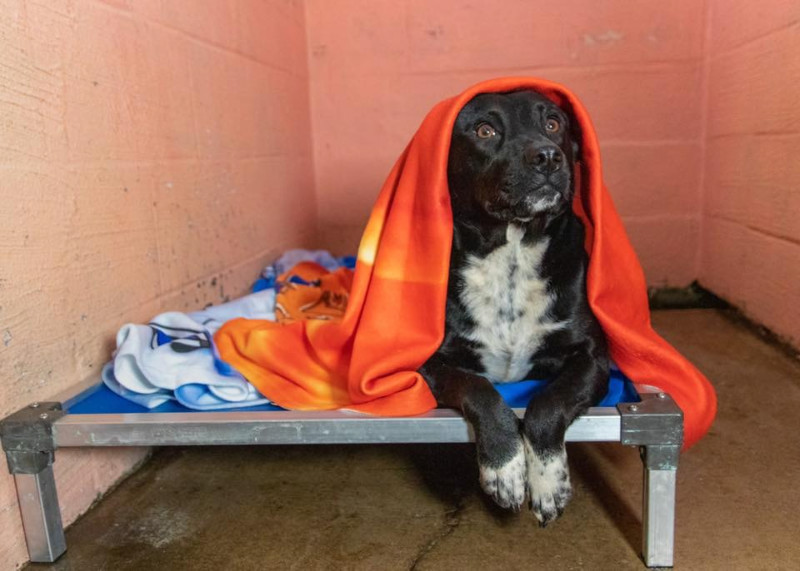 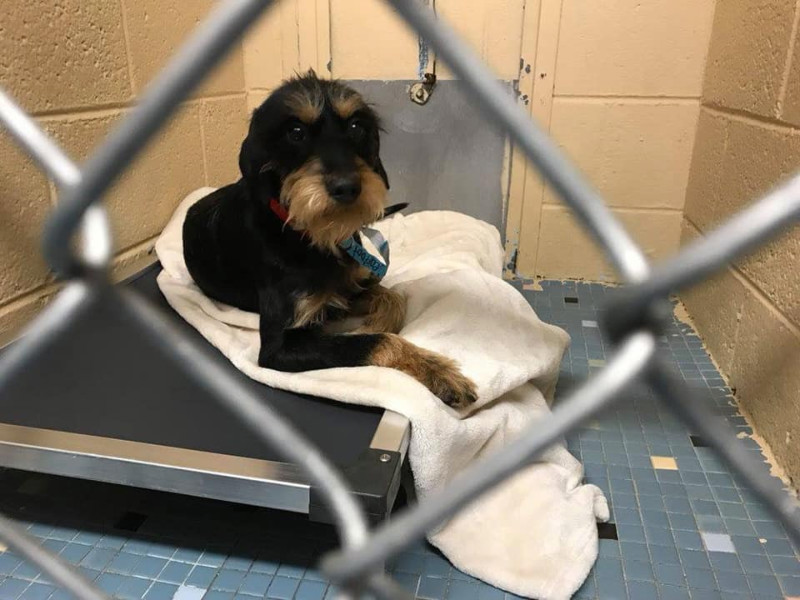 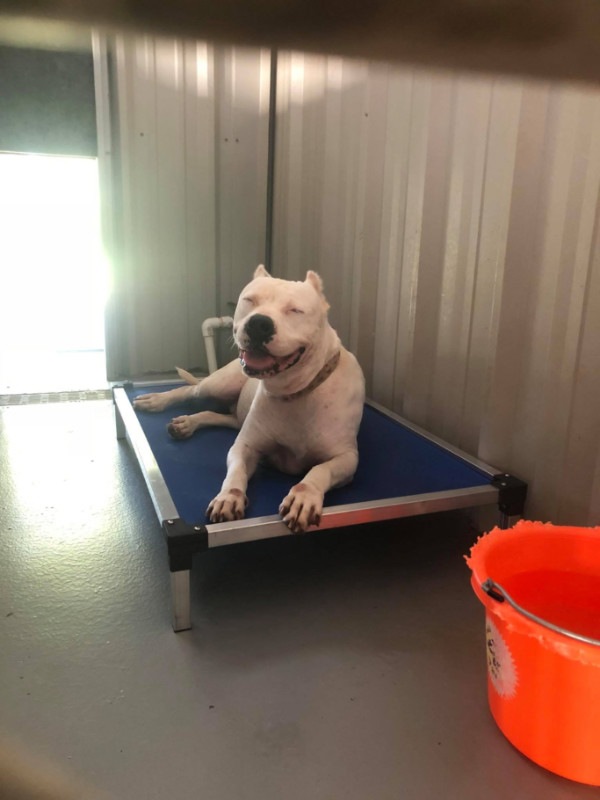 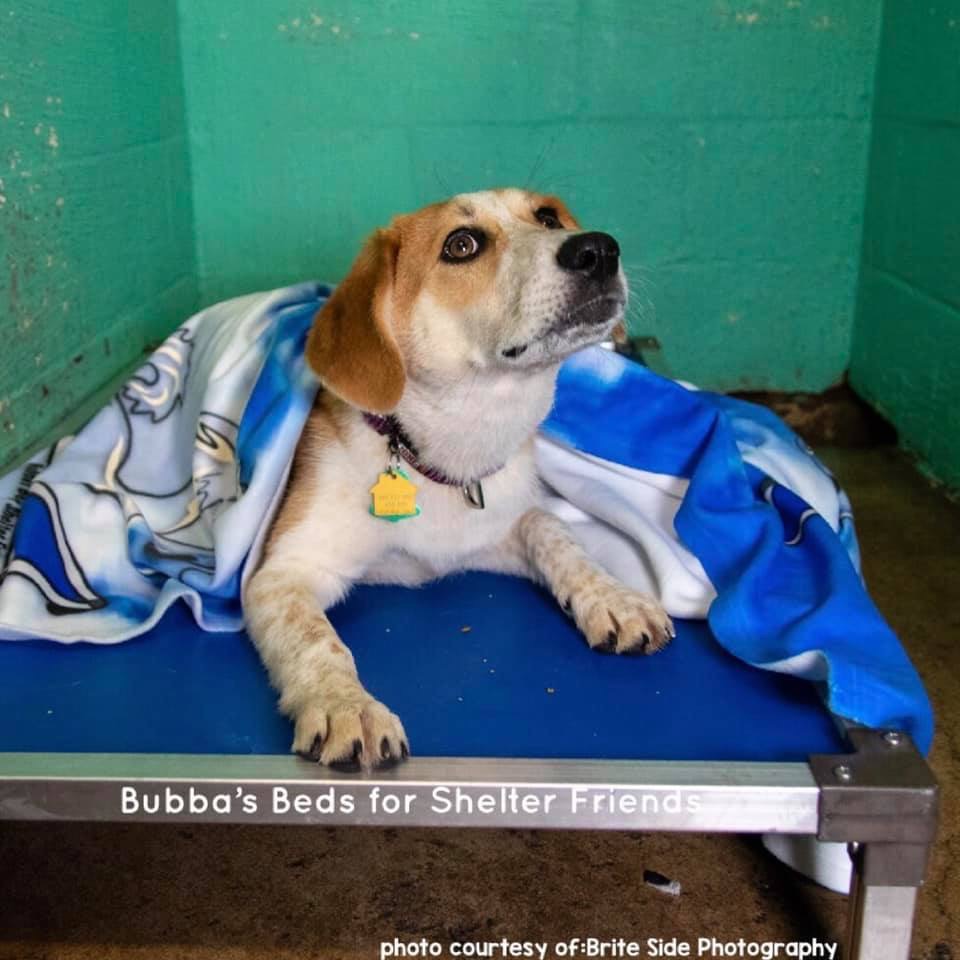 Hundreds of suffering dogs and cats enjoy relief thanks to Bubba's Beds for Shelter Friends.

At the time of their visit, the Ambroses were grieving the loss of their beloved rescue dog, Bubba. Matt explains: "Bubba, a mixed breed, had been an abused dog, afraid of men; his feet had never touched grass before we got him from a shelter in New Jersey. But with lots of love as part of our family for 12 years, he turned into a vivacious, happy little guy." When the couple decided to donate a small number of beds in Bubba's memory to comfort the animals housed at the Utica facility, that modest contribution marked the beginning of Bubba's Beds for Shelter Friends and the Ambroses’ steadfast mission, as they describe it, "to improve the quality of life for all shelter animals, one bed at a time."

The Westmoreland residents can relate many tug-at-the-heartstrings tales highlighting the beds' remarkable effect on even the most unruly and traumatized animals. After Hurricane Harvey's assault on Houston, Texas, in 2017, Matt and Julie joined forces with Utah-based Best Friends Animal Society to provide beds and support for nearly 1,000 flood-displaced cats and dogs temporarily housed in a converted sports arena. A brief before-and-after video of the scene begins with the traumatized dogs' frantic pacing and constant howling, followed by the serene atmosphere after they settle down in their new beds.

"In a short span of time, the animals were sound asleep, out cold," Matt recalls, adding, "Seeing the relief on the faces of the animals after we place them on their beds is the best part of what we do. When animals have a restful sleep, they are less agitated, friendlier, and more likely to be adopted. We've seen that happen multiple times." 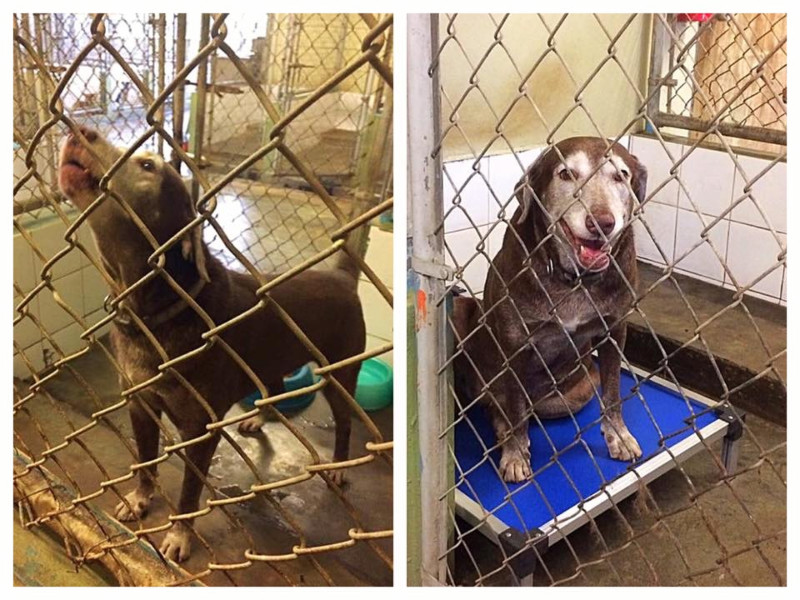 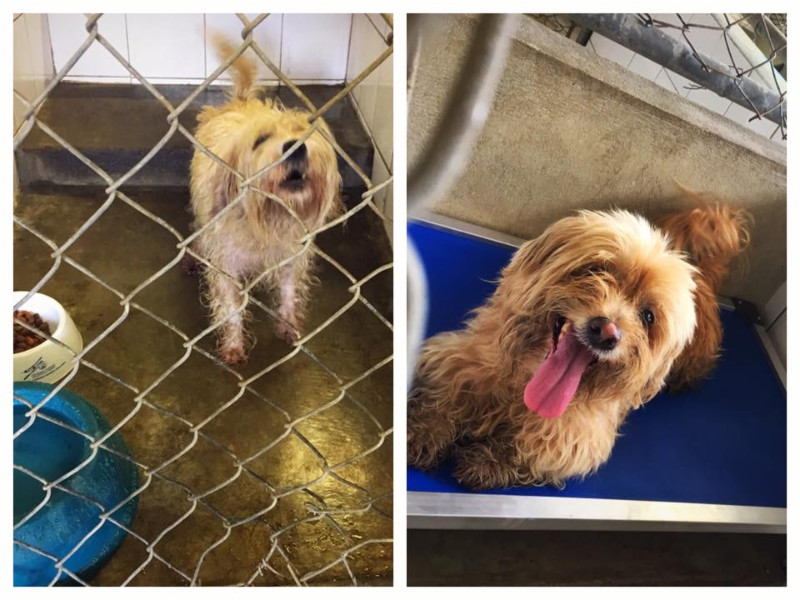 These photos show the contrast between the dogs before their donated beds and after.

Since its inception in 2016, the 501(c)(3) nonprofit organization has provided more than 4,000 beds to approximately 100 shelters across the country, including many in New York, 15 in other states, and even as far away as Puerto Rico.

Bubba's Beds is 100 percent volunteer-run, with 91 percent of all funds raised going directly into providing beds for shelters. In recognition of its exemplary work, the fledgling charitable operation received CNY Business Journal's 2016 Central New York Nonprofit of the Year award. And the Syracuse-based Sun Auto Group recognized Matt at their October 2018 awards ceremony, choosing him as one of the "40 Unsung Heroes of Central New York" for his dedication to serving the needs of shelter animals.

Along with providing warm beds, the couple also uses their individual talents toward the success of their "pet project." With unmistakable pride in his voice, Matt describes his wife's ability to calm even the most high-strung animal with her reassuring presence, "She has no fear of dogs. She is as comfortable cuddling with a kitten as she is with a big, intimidating dog." 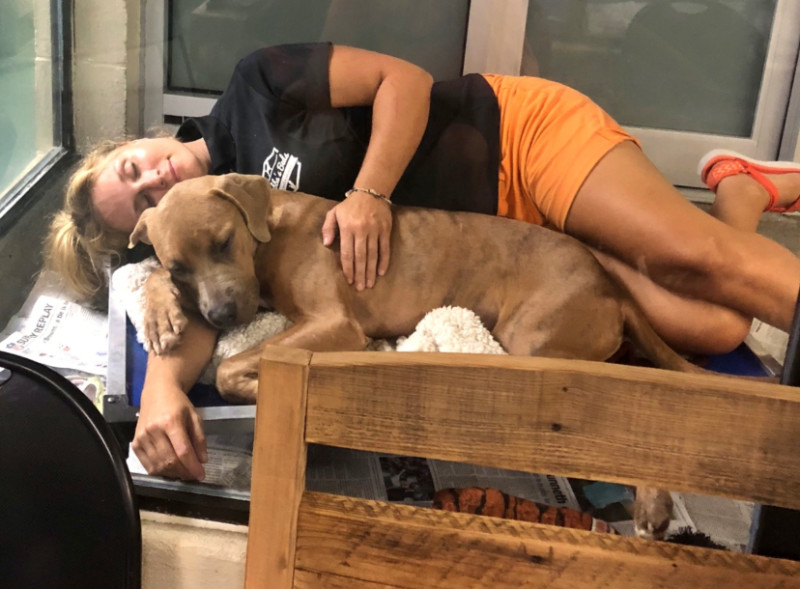 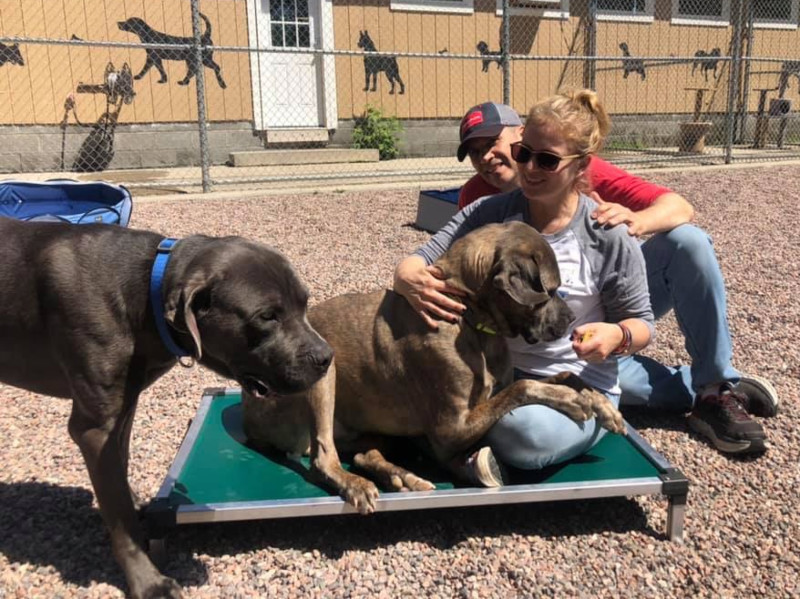 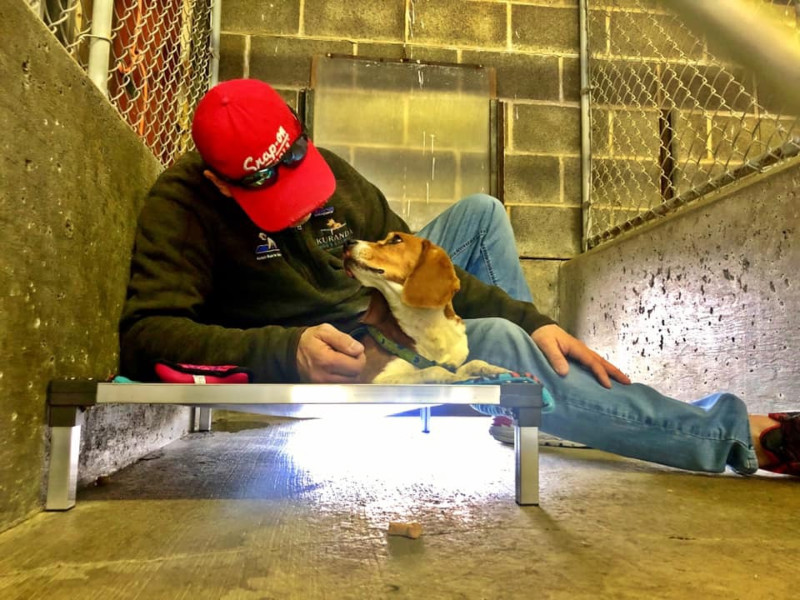 Julie and Matt both have a real sense connection with the animals.

Matt recalls a sandy-colored mixed breed dog at a shelter in New Orleans. At first it was "bouncing off the walls," he said, which made it seem "unadoptable" even though the shelter had strategically placed the cage in a high-visibility area for visitors. But after Julie climbed onto the bed and cradled the dog on her lap, its high-strung demeanor relaxed dramatically. Less than an hour after they left the shelter, a jubilant manager phoned to let them know that the previously "unadoptable" dog was heading home as well - with his newly adoptive family. "That call reinforced our belief that we were definitely helping the animals,” Matt said.

Their most visible work happens at the shelters, but there’s plenty to do behind the scenes too. Both Julie and Matt also contribute countless hours and their creative skills to the cause.

Julie raises funds for Bubba’s Beds by baking vegan dog cookies to sell at events and crafting fabric "bones" made of fleece braided and knotted at each end. Sold at local veterinary clinics and other businesses, these pet toys can be frozen and are ideal for canines who like to chew.

Matt assembles and repairs beds, and whenever needed, serves as chief problem-solver. He also builds equipment specifically designed to meet the needs of injured animals, a skill he first learned when he and an engineer friend used PVC pipes and walker wheels to construct a custom-designed wheelchair for Bubba in his later years. He even fashioned a personalized license plate as a finishing touch.

After Bubba's passing, the Ambroses gave the wheelchair to a dog named Miracle, who had been struck by a car and left abandoned at a shelter in the aftermath of Hurricane Maria, which devastated Puerto Rico in 2017. Paralyzed from the torso down, the small terrier was forced to walk on its front legs while dragging its lower body. Remarkably, the custom wheelchair proved to be a perfect fit for Miracle, improving the dog's mobility and creating a remarkable change in demeanor. As Matt points out, "Bubba's wheelchair allowed Miracle to go, go, go, and even play with the other dogs in the shelter." The happy-go-lucky dog now has a forever home with its adopted family in New Jersey.

After experimenting with several types, the couple settled on Cambridge Metal beds, produced by the Maryland-based Kuranda Company. The bed's 40-by-25-inch, heavy-duty vinyl construction is the most durable and easiest to maintain, and suited for dogs that are nursing, injured or elderly. The aluminum frames resist rust and stand up to chewing. And the hammock-like design keeps even the largest occupants suspended about six inches off the ground, which eliminates pressure on the animals' joints. Compared to other less-durable plush styles, the Cambridge Metal beds are virtually indestructible, decreasing the chances of choking and injury. The beds also work well with the feline population; nine shelter cats can sleep in one tower of stacked beds. 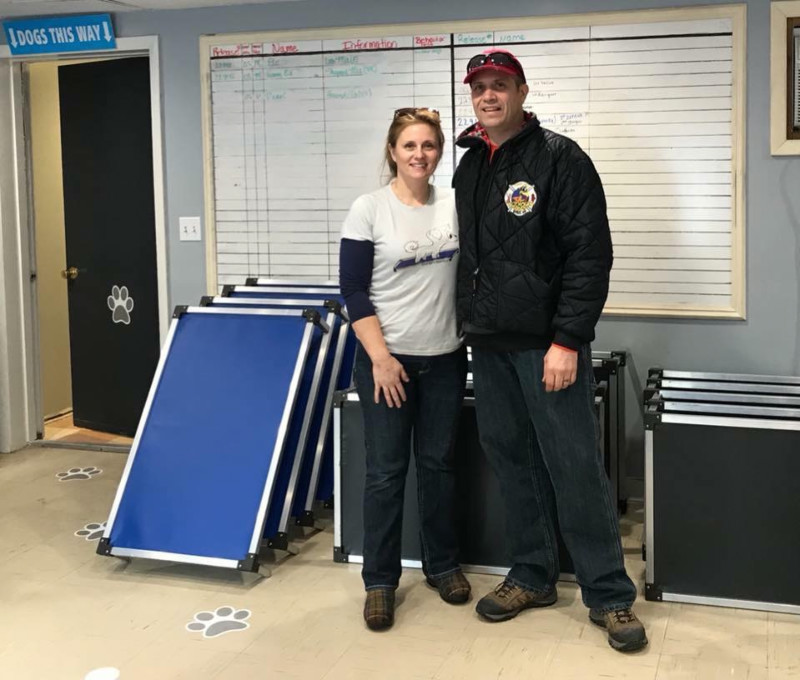 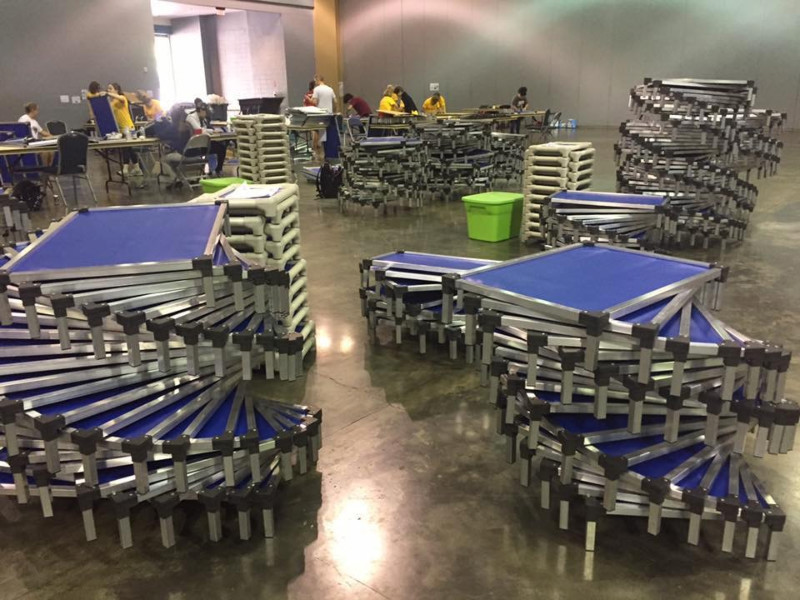 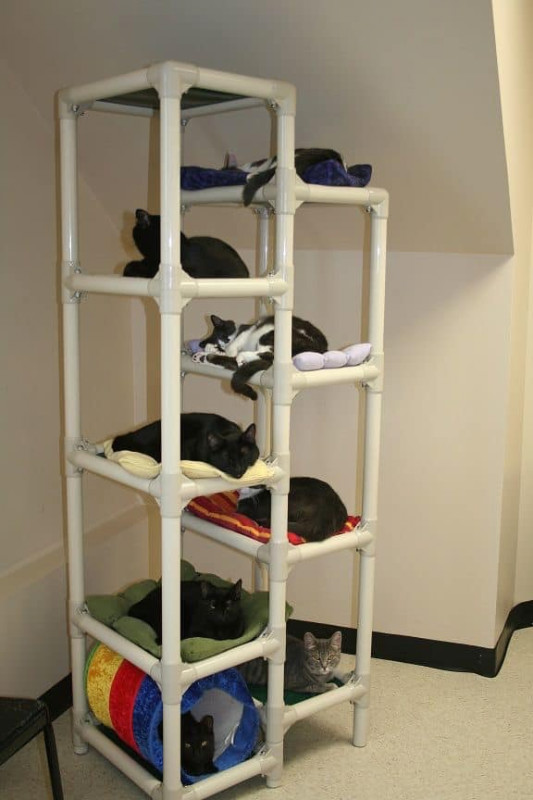 Recently retired Kuranda employee Carol Grandmougin, shares Matt and Julie's passion for helping abandoned animals. She cares for 16 dogs, including a blind golden-mix named Hank and a dog with cancer, in her New Jersey home. She arranged for the Ambroses to assemble and deliver 100 beds to five shelters located in her state.

"Julie and Matt are incredibly caring, generous and dedicated. They are quietly making an amazing difference in the physical and mental lives of shelter animals all over the country. I have seen how the whole demeanor of the animals changes as soon as they lay on the clean and soft beds, instead of on the cold, often messy, concrete floor, even in the winter." ~Carol Grandmougin

Grandmougin has seen caregivers at shelters "light up" when they see the animals comfortably curled up on their new donated beds. Another benefit: Potential adoptive families visiting the facility are more likely to choose a clean, contented-looking animal.

The Ambroses, in turn, appreciate the unwavering support from well-wishers such as Grandmougin. "Without Carol and Kuranda's help we would not be as successful as we are today," Julie acknowledges. They also gratefully recognize the wholehearted support they have received from area groups, including Syracuse Law School, the Cornell Shelter Medicine Club, and local Girls Scouts troops, as well as volunteers who help to assemble the bed kits. Even the colorful delivery trailer, which transports the bed kits to their destinations, is cheerfully emblazoned with logos from the local and national businesses that contributed funds for the vehicle's purchase. 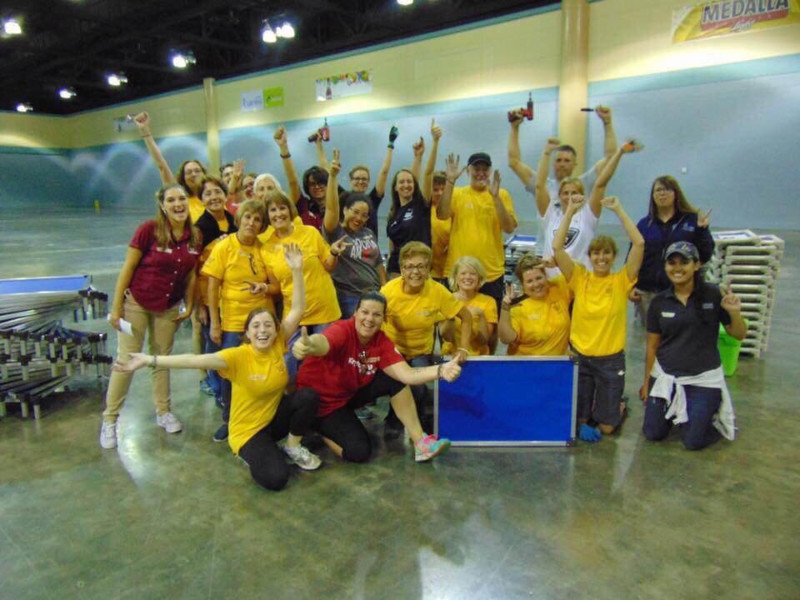 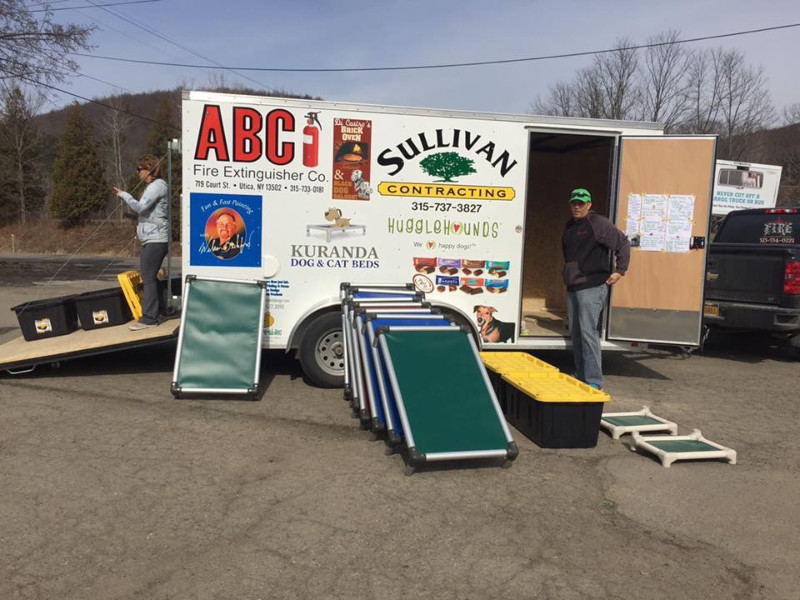 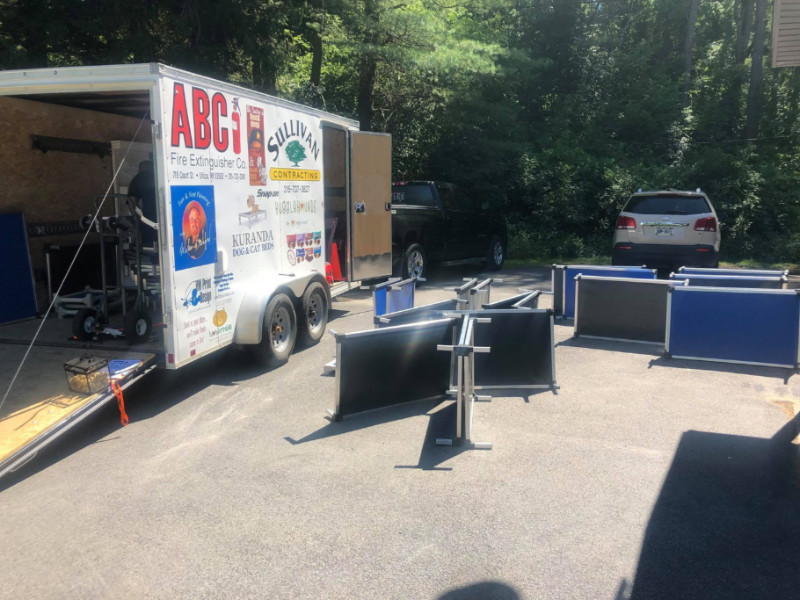 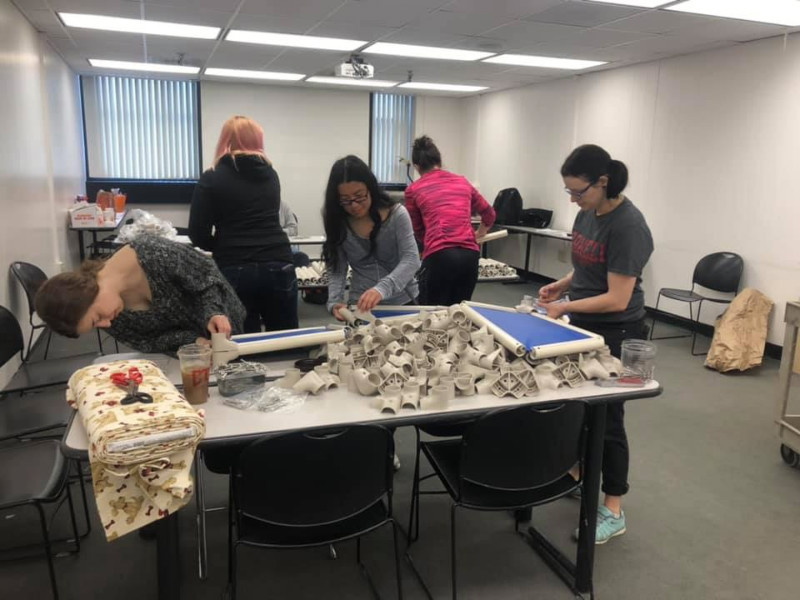 Bubba's Beds for Shelter Friends couldn't continue its mission without a large and generous support network.

Julie recalls the early years of Bubba's Beds and how their initial donation to Stevens-Swan Humane Society led the Ambroses to organize their first fundraiser. Held at the Vista Lanes Bowling Center in Yorkville, their modest goal was to raise enough money to purchase 10 beds for the shelter; instead, the bowl-a-thon's success netted sufficient funds for three times that number. The event, which has become the organization's biggest source of income, includes an auction of prizes such as vacation packages, guitars and bikes.

Matt and Julie Ambrose have willingly embraced an admirable goal, one they gladly share with others. As Matt explains, "Our vision for Bubba's Beds for Shelter Friends is to have every shelter animal sleeping in its own bed. We invite all animal lovers to help us make that a reality."

And thanks to their unflagging efforts, deep, audible sighs from contented animals just like Rusty are a welcome reality for thousands of shelter animals, with many more to come. 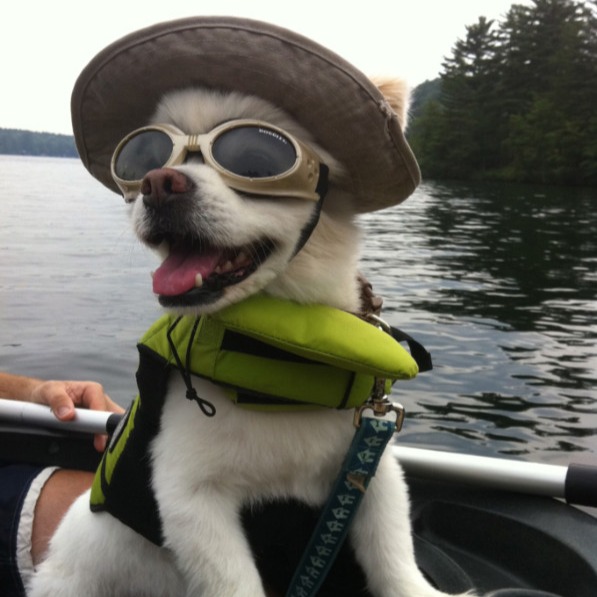 Bubba, the inspiration for it all

At the used bookstore on Route 12

All in a Name